Mom said I had the ultimate test of my training...

We went to this place called the Jacksonville Zoo on Sunday. There were a bunch of animals there that I have neither seen nor smelled ever before! When we got there, we had to go to a special window and the zoo lady announced to all the other zoo people that we were there and what my name was and what I looked like. She said we couldn't go in the aviary (because the birds are loose and they don't want me to scare them) or the reptile house. Mom doesn't like how hot and humid the aviary is and Grandmom doesn't like the reptiles so we were ok with that. 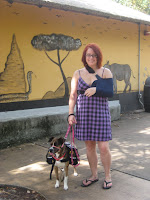 Me and Mom in front of a painting of animals 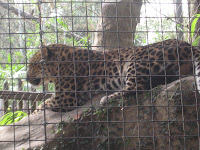 That is a giant kitty! Our kitties at home are the size of that kitty's head! 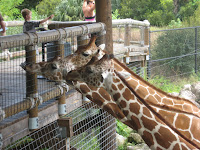 Those things are called giraffes...they are really tall and their necks and legs are super long. 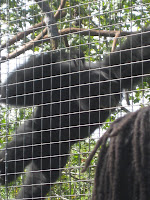 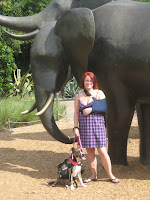 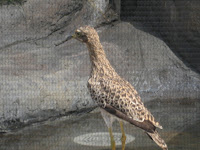 This is the most annoying bird in the world. It squawked way too loud for me. 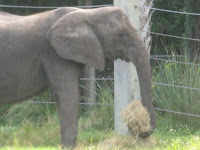 This huge thing is called an elephant. Thankfully Mom said it only eats plants.
We saw a lot more animals at the zoo but they didn't bother me. I knew I was working so I ignored them. I also ignored all of the people and small humans who petted me even though Mom said no. Mom said she was very proud of me. After the zoo we went to dinner with some of Mom's friend on the computer board she types on all the time. We all has lots of fun!
Today we had to get up very early to go to Mayo Clinic for Mom to be on standby (whatever that is...she sat the whole time) and I took a nap. They couldn't do their test, so we came back to the new hotel place and Mom and I took a nap. After our nap, we went to the chiro doctor who really likes me. She did some stuff to Mom, but it didn't hurt her, so I was ok. After they were done, we went to some outside stores and then to dinner at a place called Cheesecake Factory. Well, Mom and Grandmom had dinner, I slept on their nice cool floor under the table. When we got up to leave, the waitress lady and the people across the aisle at a table said they didn't know I was there. Mom said that was a very very good thing and that I was a Very Good Dog.
Posted by Ashley The CRPS Girl at 6:00 PM

Promote Your Page Too